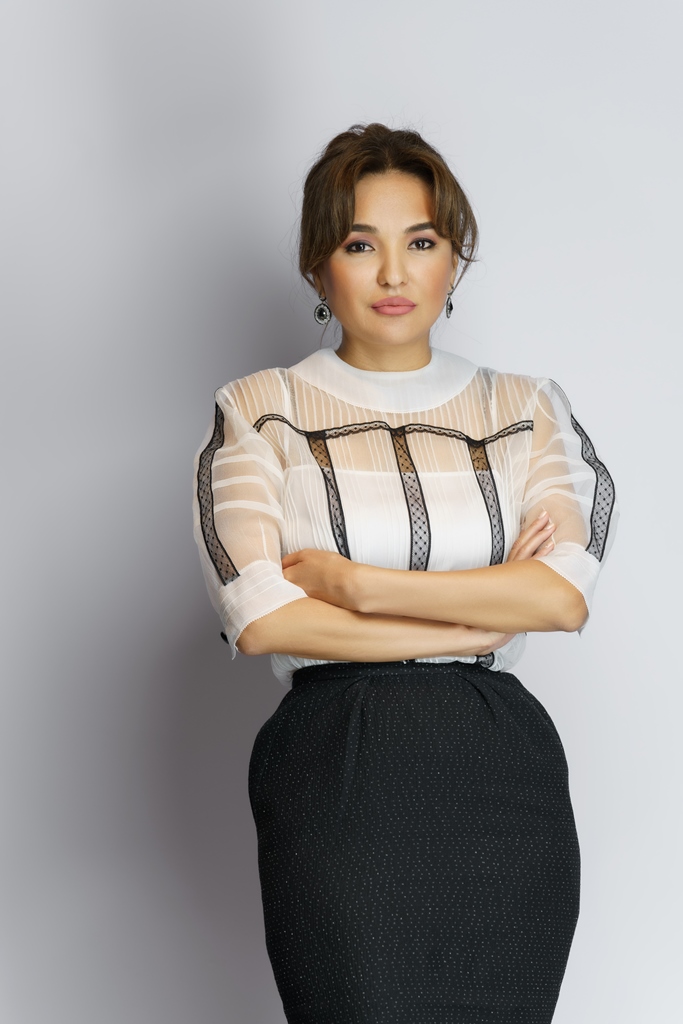 President of the Saby Charitable Foundation:

«Today marks the 20th anniversary of the main life-work - the Saby Charitable Foundation.

During two decades, we have been assisting the development of all areas and all spheres of life in Kazakhstan in a comprehensive, structured way, based on in-depth analysis. We are involved in building orphanages, reconstructing hospitals, and improving the lives of disabled people. We support attractive projects of young entrepreneurs. Our special focus is on education, health care, and developing the potential of talented young people.

Looking back at a long way, I realize that all these years not only our Foundation has been evolving. Along with it, I myself was changing and was being formed my deep understanding of the act of "charity" . After all, it's not just a financial aid. The main point of charity is to be involved in the problems of your fellow citizens, to provide them not only financial aid, but also help them with your professional skills, to give time, empathy and love. Working at the foundation occupies a large part of my life and I am interested not only in creating and implementing projects. I get enormous satisfaction from meeting and communicating with the dedicated heroes of our programs: theу are doctors, young entrepreneurs, specialists from the educational sphere and many others. And the awareness of the work scale done gives an incentive to continue being creative for the good of our country!

For 20 years of work, the Saby Foundation has implemented many projects.  Today it is a steadily working, systemic fund that creates the conditions for change in our society, change in the real lives of our citizens. The main goal is to do everything possible to raise a generation in Kazakhstan that is confident in its abilities and ready to support others, a generation for which all opportunities of the modern world will be open.

One example is the "Invataxi" project, a transportation service for people with special needs. Today, such a kind of taxi operates in 20 cities in all regions of Kazakhstan. Not only specialized vehicles, but also stairlifts were purchased. The project reaches 43,000 people. Imagine: all these people who previously had to spend time within four walls, became mobile, were able to start training or get a job.

Ten years ago, the Saby Foundation built a modern, comfortable Orphanage for orphans in Kyzylorda. Prior to that the children were living in a barracks. For the first time in the region in our new home the European Montessori early development program was introduced.

And here is the result: today there is not a single orphan left in the three two-story buildings - all of them have found new families. After being in an atmosphere of physical and emotional comfort, the children recovered themselves, opened their hearts, healed their wounds, and the children began to be adopted.

Meanwhile, our house was not empty. Now there is a crisis center for mothers who found themselves in a difficult life situation.

In the city of Aktobe we established "Mejirim", the unique Center for Social Adaptation of Youth - for orphanages graduates. From the very first days of our Foundation, I've had the chance to work with children who grew up without parents. And I knew that at least one out of ten, after leaving the orphanage, ends up in a correctional facility because they don't understand how to find their place amongst adult life. I dreamed of changing this terrible statistic. And we built "Mejirim" - the real neighborhood unit: four two-story townhouses and one administrative building. 80 apartments, where orphanage graduates live, who have no one, no relatives, no loved ones.

Our project has been running for five years now. The children learn how to live in society, and here, in "Mejirim", they learn in-demand professions. Establish and guarantee themselves a steady income.

We can recall the project "Build Your Own Business" - 8 years of support for small businesses, and the project "Emergency pediatric surgery" - modern medical centers in four regions of Kazakhstan, saving children's lives on everyday basis, 48 sports facilities in 14 regions of the country, support for young mathematicians, poets, musicians, environmental project: 3 expeditions were held for 3 years, 6 scientific publications and 3 documentaries were issued. In August 2019, Kazakhstani first and the only "Center for the Study and Rehabilitation of Caspian Seals" opened in Aktau. The above mentioned are stories of only a small part of our programs.

All of this is infinitely dear and very important to me. We can be rightfully proud of the results of our years of work and rejoice over the victories of our wards.

About the realities of Kazakh charity

Over the past 20 years, private and corporate philanthropy has grown beneath our eyes in Kazakhstan, on the foundations of the ancient tradition of philanthropy. We have kept an eye at its evolution: communities of volunteers appeared, which are ready to help the cause, online donations became common, where even the most modest mite is valuable, and thanks to crowdfunding platforms, everyone had the opportunity to make themselves known and get support for the realization of a business idea or for collecting aid for those in need.

But it is still very common to hear statements like this: "Why do we need these charitable foundations?" There is a perception that they substitute for the functions of government agencies, giving officials the opportunity to relax, to shift responsibility for people and projects that they must support and to private philanthropic initiative.

I fundamentally disagree with that. At all times and in almost all states, including the most developed ones, there has been and still is an institution of charity. Moreover, the stronger the country's economy, the more authorities stimulate the charity institution and patronage of arts.

In the U.S. and Canada, donations for charitable purposes are tax deductible. Tax deductions are up to 75% of the taxable base in Canada and up to 10% in the United States. Individuals engaged in charity can count on income tax relief: from 30% to 50%. In EEC countries, non-profit organizations are entitled to a reduced rate of VAT on purchased or sold goods and services. Benefactors - individuals - also receive deductions based on donation amount and citizenship.

In the Republic of Kazakhstan there are no special tax breaks for non-profit organizations.

So we have a corresponding result. There are approximately 1.5 million of nongovernmental organizations in the United States. There are 865,000 organizations registered in the United Kingdom. According to the Committee on Civil Society Affairs there are 16,426 active NGOs in Kazakhstan, whose activities are represented in various directions, including 1,126 charitable foundations.  The share of income of the so-called "third sector" in Kazakhstan's GDP is less than 1%. In North America and Western Europe the figure is up to 6.5%. The number of employed people in our country is about 1% of total employment, in developed countries it is 7.1%.

On the vectors of development of charity

Below I would like to highlight the factors, in my opinion under which the qualitative development of the charity institution in Kazakhstan will be possible, and interaction between the state and non-profit organizations will become much more effective.

When the state accepts the idea that philanthropy is not just collecting money for some good deeds, but creating a certain environment, the development of civil society, then the ice will be broken. When the state will be interested in the development of charity. However, this requires serious revision of the tax legislation. Once legislative incentives are in place for companies and individuals that are engaged in philanthropy, there will be a demand for charitable organizations. Accordingly, there will be a demand for these organizations rating.

In order to determine the standards of charitable organizations and, accordingly, to evaluate the performance of foundations, it is necessary to introduce ratings. The rating would allow a deeper analysis of the foundation activities and give an understanding of the direction in which they should improve work. The ranking is a great opportunity to attract grantmakers, business representatives who are willing to help through those institutions that can be trusted. Finally, it would identify pseudo-funds and fraudsters. Trust is one of the most important indicators in the work of charitable foundations.

Unfortunately, for now we have not formed the conditions for the creation of endowment funds. There is no clear legislative regulation of the work of such organizations, and the state does not pay due attention to this. In fact, throughout the civilized world, endowment funds are one of the main pillars in the education, science and culture development. A striking example of a successful and world-renowned endowment fund is the "Nobel Prize", the world's most prestigious award for scientific and cultural achievements. And, for example, the largest educational institutions in the United States and Great Britain - Harvard, Cambridge, and Oxford - receive up to 30%-40% of their budgets from such foundations. I believe that this direction development in our republic would allow us to make a qualitative leap in the development of scientific and educational potential.

At the same time, I am categorically against the monopolization of non-profit organizations. And giving charity any political connotation. The more NPOs actually working in different areas, the stronger and healthier society will be, the more it will be involved in the social life of its country.

To date, the Saby Foundation, having implemented a huge number of systemic projects, has a certain expertise and competence. Including the development of charitable projects for the commercial sector. We are happy to share our accumulated experience and knowledge so that our country can truly develop a civil society.

Undoubtedly, the charity in Kazakhstan has already passed a significant evolutionary path. And I am so grateful to all my colleagues who have been doing this important work for many years, despite the difficulties. Special thanks to all of our donors, patrons and friends, and my very best dedicated team of like-minded people!

I am sure that together we have begun to lay down the culture and traditions of patronage in Kazakhstan, which in the near future will reach a new level!

“The word happiness in Russian comes from the word part. We experience happiness in parts, moments, and charity is the best way to become involved in something greater than yourself. I made this discovery 20 years ago when…

Blog
Aselle Tasmagambetova about the competition…

“Even in the time of our ancestors, Kadyr-ata said that “A real Kazakh is not a Kazakh himself, a real Kazakh is a dombra!” Dombra is a sacred Kazakh instrument. The spirit of the Kazakh people. Source of…

Blog
Aselle Tasmagambetova about a modern approach to…