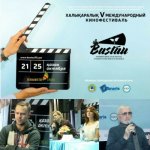 From October 21 to October 25 the V International Festival of Student and Debut Films “Bastau”, the sponsor of which became Saby Foundation within the framework of the “Alem” Program.

Citizens and guests of Almaty city had free opportunity to enjoy modern films for youth in BekmambetovCinema 3D. International jury, represented by distinguished people of cinema art of Kazakhstan, Russia and Germany, made an estimate of participants’ works.

The winners of all 10 nominations became young participants from four countries. Also two student projects from Kazakhstan were awarded by special grants in the amount of 1 million tenge. The money was allocated for the creation of short films on the provided scripts.

More than 40 guests from 18 countries, precisely famous directors, actors, heads and teachers of leading cinema schools of the world, as well as more than 200 students and graduates of leading cinema educational institutions of Kazakhstan took active participation in uncompetitive events of the festival.