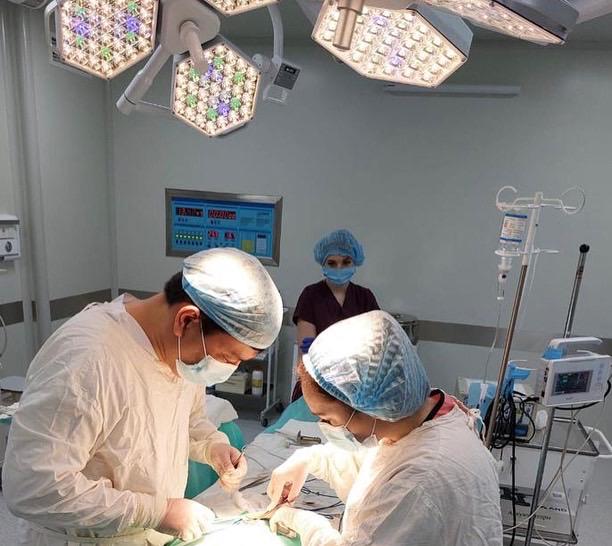 In February, the Saby Foundation opened a new modern pediatric emergency surgery department in the city of Petropavlovsk. Three operating units have been launched here, in which the most advanced medical equipment has been installed.

In addition to construction and equipment, the training of local specialists is an obligatory point of our Emergency Children's Surgery project.

Last week, especially for Petropavlovsk doctors, we organized the arrival of the leading pediatric surgeon of the Russian Federation, Doctor of Medical Sciences, Professor Yuri Yuryevich Sokolov. Under his leadership, complex operations were performed on laparoscopic cholecystectomy, laparoscopic elimination of varicocele. The operations went without complications. The postoperative period proceeds safely. Patients are under medical supervision. 18 patients undergoing treatment in the department were also consulted.

In addition, Dr. Sokolov read a series of lectures for Kazakh colleagues on the topic “Endovideosurgery. Operative interventions in pediatric surgery”.

In total, during the project period, in the departments opened by the Foundation, Sokolov performed 18 complex operations, assisted by local doctors; 70 doctors from Almaty, Semey, Aktau, Atyrau, Taldykorgan, Taraz, Pavlodar and Petropavlovsk took part in organized master classes. All operations were carried out at a high level, little patients received a full course of treatment and were safely discharged home. Doctors, in turn, actively apply the baggage of the theoretical and practical knowledge gained to save the lives of children in the regions of the Republic of Kazakhstan.

We thank Yury Yuryevich for the exchange of experience, valuable knowledge and effective methods, which will now be successfully used in Kazakhstan.

Medical Project
The work of pediatric emergency surgery in Semey

President of the Saby Foundation Aselle Tasmagambetova, as part of her trip to Semey, visited the Department of Emergency Pediatric Surgery, built and opened by the Foundation in January 2020 in the Children's Hospital at the…

Our subscribers and friends of the Foundation know that Saby implements its projects in all regions of Kazakhstan, covering almost all socially significant areas. And we would like to share the good news of our beneficiaries more…

Medical Project
Four children's surgeries worth more than a…

Today, the Saby Foundation opened a new department of emergency pediatric surgery in the city of Petropavlovsk. This is the fourth surgery built and fully equipped by the Foundation. Three operating blocks have been launched…